Recensent:Jeroen Bakker      Artiest:Johnny Dowd        Label:Mother Jinx Records
– Original Article
For more than thirty years, Johnny Dowd has been part of the established order of roots music, of the alternative country or what we now know better as Americana. But despite the wonderful lofting that has been written about him, Dowd has never managed to reach a large audience for his music. Not surprising when you consider that the idiosyncratic musician really does everything he can to not walk the paved roads. Ingenious, but often bizarre, quirks and worldly adventures in text and music do not make it easy for listeners. Especially on the last year, Twinkle, Twinkle Dowd seemed to be pretty lost. Earlier, he looked up the sharp edges and the filthy edges of the roots music. It seems likely that alcohol and drinks played a role in this. However, the blurred look always made his music and lyrics fascinating. To optimize the atmosphere, he regularly sought out an inspiring environment. For example, he once started writing in the office of his removal company, but later he also used a studio whose walls were completely covered with obituaries. Stupid subjects and themes such as ‘murder’, ‘death’ and also the sad sides of love have always been liked by the musician who was once born in Texas, but now lives in New York.On the Family Picnic , which was published earlier this year, we can hear it again in its well-known black-and-white manner. After having misled the listener with the strange instrumental opener ‘Hoodoo’, an equally remarkable waltz follows, in which Johnny plays with distortion and other gritty tones that you can conjure from an electric guitar. “I was never the man of your dreams”it sounds fake, but sincerely sung. In the dark ‘Vicksburg’ it even seems as if Tom Waits came sneaking into the studio during the recording. The American Civil War is described here in a very special way. It is frightening, without any inhibition. It is typical of Dowd that you can hardly imagine that he has now passed the seventy years. With pointed guitar work and electronic beats, he raps through ‘Shameless’ and enters a strange dark world during ‘Walking The Floor’. With vocal help from Kim Sherwood-Caso and supported by Michael Edmondson on guitar and xylorimba, a special percussion instrument, Dowd takes the listener into normal, everyday events such as a family picnic, but is nothing as it seems. Almost everything degenerates into a surrealistic situation and genius and madness seem very closely related. Sung passionately is the sweet ode to gospel singer Thomas Dorsey by Dowd, who, however contradictory, has always been mainly involved with Devil’s music. Despite the good intentions, ‘Let’s Have A Party’ sounds inviting, but we prefer to decline this invitation and enjoy the musical antics of this special veteran from a very interesting distance.Family Picnic .
– Translation by Google

Execute American Folklore was not the most accessible work, from the idiosyncratic from Ithaca, with Twinkle Twinkle Johnny Dowd takes on the messy thread of the predecessor. From the opening stand of Execute American Folkore, Again one, the listener is confronted with an electronic pulp and on top of that the familiar, growling parlando, regularly accompanied by the thin vocals of Anne Coogan. With the exception of the title track, Dowd, with some help from Michael Edmondson, only took care of ‘the music’.

He approaches the seventy in the meantime, but his experimental drive is by no means tempered. Well-known singalong tunes from the great American songbook are transformed into hallucinatory sound tapestries with first-class formulas and primitive electronic instrumentation.

They are not exactly the most beautiful sound scenes, usually the traditionals, only recognizable by the familiar text fragments, degenerate into a frightening soundtrack that may not only stimulate puristically oriented listeners to pull the curtains and quickly pull them off. If you persist for a while, you will discover Trouble in Mind . That song passes here on a cumbersome beatbox structure, undoubtedly the most remarkable version of the song that has not only become a classic in jazz and blues environments, which pianist Richard M.Jones composed in the early twenties of last century.

With Red River Valley an older folktune is transformed into a bizarre rocker. It takes a while to discover St James Infarmary Blues or Jon The Revelator in the erratic structures. With the macabre spoken word version of The House Of The Rising Sun and My Darling Clementine that goes float .

Listening to this long player is not an easy task, we suspect that Dowd especially amused himself during the recording sessions. Undoubtedly only suitable for adventurous adepts in a never completed search for curiosities. Musical amateurs who answer that profile will undoubtedly get their money’s worth on the upcoming tour with Melle de Boer.

Making a cover album the umpteenth highlight in your impressive oeuvre. Johnny Dowd succeeds. It should be said that the performances on “Twinkle, Twinkle” are just as idiosyncratic as their own compositions.

This previous album was strongly hip-hop oriented. There is no question on “Twinkle, Twinkle”. Although Johnny Dowd quotes Public Enemy (“Fight the power”) in the opening song. Vocally, the Bluesman appears old-fashioned with its cross-section of American traditionals. Although American …

The song to which the album title refers, ‘Twinkle, Twinkle, Little Star’, is a poem by the English poet Jane Taylor on a French melody. (‘Ah! Vous dirai-you, maman’).

Also ‘The Cuckoo’ has been adopted from England. It gets a solid beat from Johnny Dowd. That does not matter. Singer Anna Coogan manages to make it a melodic highlight.

‘Trouble In Mind’ (performed by Ella Fitzgerald and Nina Simone, among others), gets an Industrial approach from Johnny Dowd on which a synthesizer is also flogged.

‘Going Down The Road Feelin’ Bad ‘(which we know from Woody Guthrie and The Grateful Dead) has never sounded as funky as it is now. Also ‘Red River Valley’, one of the Top 100 Western Songs, gets a funky treatment.

The Christian hymn ‘Rock of Ages’ is in the hands of Johnny Dowd completely of this time. ‘John the Revelator’, a primeval tone number, gets a respectful performance.

On ‘House of the Rising Sun’ the hiphopper Johnny Dowd pops up again. Together with ‘Tom Dooley’ and ‘Oh, My Darling, Clementine’ it makes sure that “Twinkle, Twinkle” enters the books as the album from Johnny Dowd’s oeuvre with by far the highest fun factor.

An album on which even the darkest chapter in Job’s biblical book can result in a funky ode to the Friday. 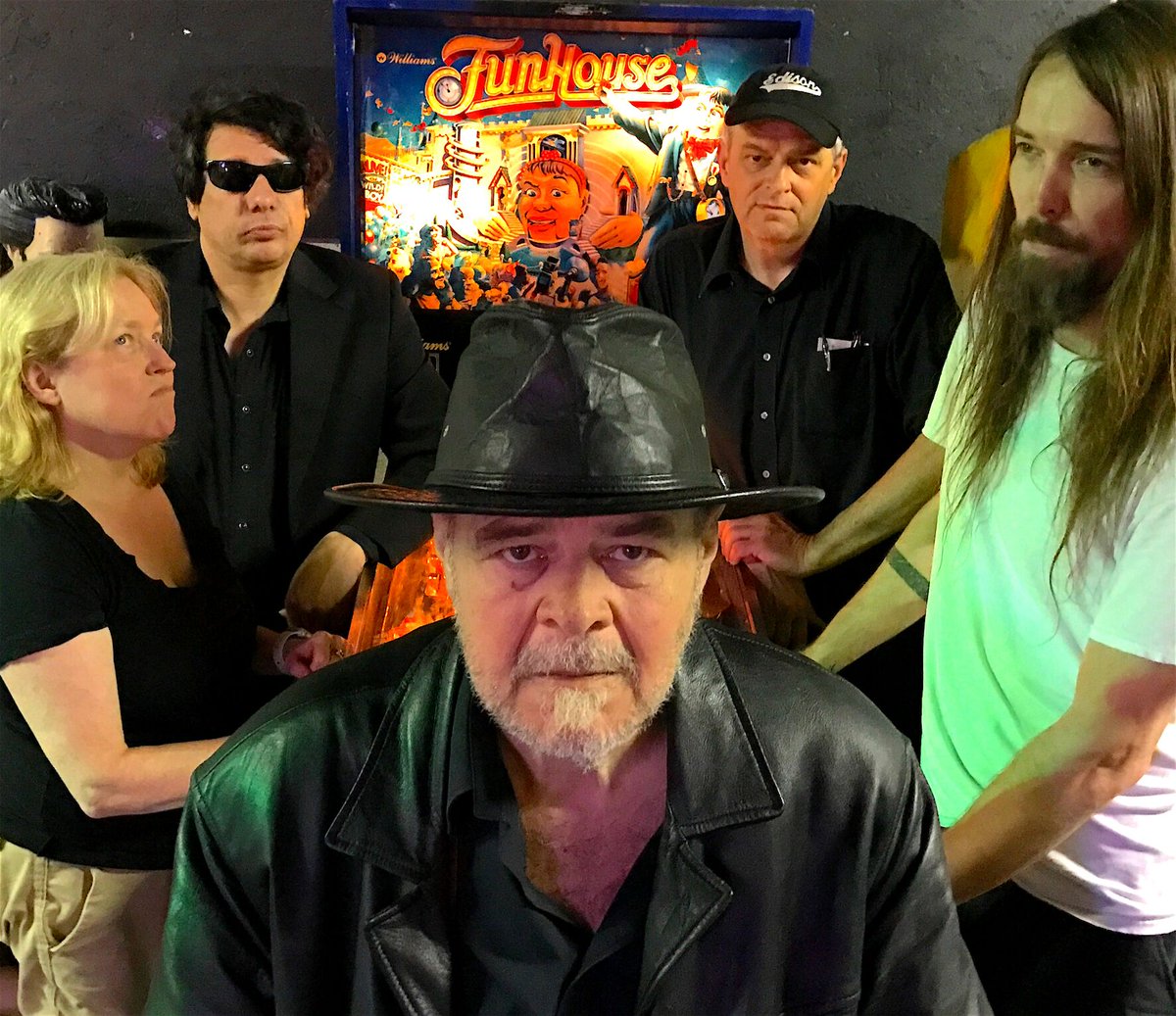 fundamentals of blue-collar rock. A three-guitar revision spans the state of the art for guitar-based rock in the year 2017. Keith Moliné is joined by Cleveland guitar legend Gary Siperko and Kristof Hahn in the now familiar orchestra of analog and digital

The touring arm of Pere Ubu will be heading out with the new album; first-off in the USA in November-December, amd with a full European tour and further USA dates in 2018.

“Sometimes music shouldn’t be easy, and instead should be mysterious, idiosyncratic

and the work of a true maverick. So we should welcome the arrival of a new Johnny Dowd album. . . . Never a man to run from the truth, if there was any justice, this guy would be a legend.” – Acoustic Magazine

“Soaked in swirling guitars with extraterrestrial synth sounds throughout Dowd here creates a piece which is on a par with the best of Beck.” – Americana-UK

HAPPY HOUR at it’s most ironic

“Sometimes music shouldn’t be easy, and instead should be mysterious, idiosyncratic and the work of a true maverick. So we should welcome the arrival of a new Johnny Dowd album. . . . Never a man to run from the truth, if there was any justice, this guy would be a legend.”

“Imagine if Hank Williams had mutated into Captain Beefheart, acquiring a bunch of primitive electronic equipment along the way, and you’ll get some idea of where Johnny Dowd is at on Execute American Folklore. . . . Gloriously deviant.“

(Editors note: For those in the know, there’ll be a Party Here tonite!)