JDF is always up up for any article even peripherally related to Johnny Dowd, but this one, I think, qualifies as VERY related! And Marjorie, we’ll take you up on that Johnny interview… – Ed. 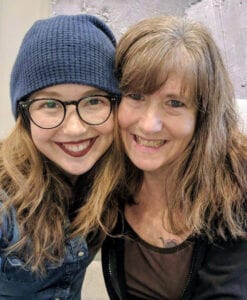 Practically a townie, Jyl Dowd has called Ithaca home since she was 6 years old. After her parents divorced, Jyl, her mother and the two next oldest siblings journeyed from Pauls Valley, Oklahoma, to Memphis, Tennessee, and then to Ithaca (a move brought on by one of the two oldest siblings, who was attending Cornell University at the time).

Jyl remembers a lively, free-spirited, loving family life growing up. Graduating from East Hill Elementary School, under the tutelage of Principal Dan Lee (“Gentle Giant”), Jyl next attended the fledgling, short-lived New Junior High Program (NJHP), housed in the old Markles Flats building (at Court and Plain streets prior to demolition) and became one of 12 in the first graduating class of the Alternative Community High School (ACHS) in 1979. (NJHP and ACHS merged into what is now LACS, the school Jyl’s children later attended.)

Jyl’s mother, Virginia “Jinx” Dowd, founded the Labor Action Coalition, along with Dan Leahy, as part of the Cornell Human Affairs Program. Many of Jyl’s earliest memories are of being hauled out of the draft board during the “Mothers and Daughters Against the Vietnam War” sit-in, handing out flyers to future Cornell graduates to encourage them not to buy their gowns from child labor factories and protesting against nuclear power.

There were also many nights spent at school board meetings, as Jinx was very involved in the early stages of bringing alternative education to the Ithaca area with her good friends Leslie Puryear, Betty Halton and Teresa Grady.

After graduation, Jyl ventured out to Colorado, where she obtained her degree in nursing, only to return to Ithaca, her family and the network of progressives with whom her family lived, worked and celebrated.

“Once my biological clock started ticking, I knew the only place I would want to raise a child was Ithaca,” Jyl said.

Jyl’s daughter Emily now lives in New Orleans, but they visit each other often.

Upon return to Ithaca, Jyl devoted the next 13 years to working for HOMES, Inc., providing inclusive, integrated care for the mental health community managing the group home Evergreen, founded by Ron Mack.

After Lakeview Mental Health took over, the emphasis on integrating the residents into the community diminished and became more custodial, so Jyl resigned to stay home to take care of her mother and her new blended family (Gregar Brous and his three children). Though the two split up 15 years ago, the families remain close.

Some of Jyl’s fondest memories are of the time she spent as a groupie for her family’s band Neon Baptist, hosting “Melrose” parties with her friends of 25-plus years, lots of traveling with and without the kids, and attending every dance recital, play, concert and sporting events the children and their friends participated in.

Anyone who has ever attended one of Jerry Dietz’-Gregar Brous’ Taste of the Nation or AIDS RIDE feast in Stewart Park, the Just Be Cause Party or Cornbread for Kids will recognize Jyl Dowd. Community is part of her DNA, and organizing volunteers is one of her favorite pastimes, as anyone who has been recruited to work at one of her events can attest.

For the past 14 years, Jyl has served at the Cancer Resource Center (previously the Ithaca Breast Cancer Alliance) as the event coordinator. Many residents are touched by loved ones facing cancer, and the Center offers a wide array of services for those people.

CRC also recruits, trains and supervises volunteers in the Cancer Services Department at Cayuga Medical Center to keep patients company while they are getting treatment and to bring them snacks.

Though affected by COVID-19, people are reassured they can call or email and arrange access to services. While Executive Director Marilee Murphy and Jyl are the only full-time staff, along with three part-time colleagues and a sizable group of amazing volunteers, they are able to continue to provide all of their services free of charge.

When I asked Jyl when she last visited the Boulder area, she told of taking a former resident who lived in the Lakeview Mental Health building on Cascadilla Street. Jyl casually mentioned that this former client now resides happily at Old 100, where he is encouraged to be an active member of the community and is very happy and well-loved.

Keep an eye out and you’ll see Jyl on her bike, living and pedaling around town. Fingers crossed that her older brother Johnny Dowd will read this, and we will get his take on local life soon.

The Cancer Resource Center is located at 612 W. State St. in Ithaca. For more information on the services offered, call (607) 277-0960 or email info@crcfl.net

JohnnyDowdFan is an unofficial fansite dedicated to the music, poetry and creativity in general of Johnny Dowd. We do not profit by this site or its association with Johnny.
No copyright infringement is intended. Photo, video and article copyrights are owned by the respective photographers and writers.
We encourage all fans of Johnny or any artist to support their art by paying for it.
POET CAFE
The Rocking Magpie

Johnny's Got the Mic