Take that, Pandemic Hell! Thanks to the wizardry of Justin Asher, Johnny has several of his band iterations getting together for a kind of quarantine version of the Last Waltz finale…except it’s not going to be a finale. Hold your breath till Thanksgiving, unless you’re busy screaming.

Hard times and more coming. About all we can do is take it day at time.

Something that really gave me a lift was the virtual reunion of my band: Justin Asher, Brian Wilson, Kim Sherwood-Caso, Anna Coogan, Mike Edmondson, Mike Stark, and honorary member, Sally Timms. We recorded “Hideaway,” which is about my mother. Lyrics by me and music by Brian.

The project was Justin’s idea, and he organized and produced the whole thing — did all the audio engineering and created the video above.

It was so much fun, we’re doing another song, “Thanksgiving Day,” which should be done by Thanksgiving.

I’m still writing and recording. At this point, I’ve got more in the vault than Prince!

Stay safe, stay in touch, and see you down the the road.

Former Johnny Dowd band member Justin Asher got in touch with other musicians who have played with this musical maverick over the years. The virtual band reunion led to a video of them recording of Hideaway, a song from the Temporary Shelter album.

Live in vicinity of Haverhill, MA? On March 7 Americana outsider Johnny Dowd plays an intimate show in someone’s house. Inquiries via email. with any luck he might play some of the stuff he is working on for his next album.

Johnny Dowd is messng around in the studio, reinventing himself again for his next album, the follow-up for Family Picni. Technology and rock ‘will meet and weird and wonderful things could happen as part of the process:

Working on some new stuff — going in a whole new direction. Samples and heavy drum machine. Somewhere between brilliant and total self-indulgence. At the same time, I’m working with buddy Mike Edmondson on some straight-up rock songs. Can I put the two together? My point is, I’m still cranking it and chasing the dream — or my own ass. Whichever comes first.

Arrangements are rough and beautiful

No, Johnny Dowd did not drink a bit too much, Tom Severer from Kohi says, “He’s just an old man.” And that’s right Dowd was born in Fort Worth Texas in 1948. As a teenager, he volunteered the army came to Berlin for these to Vietnam in the sixties, and for two years in Berlin. “Since then, Germany and this city have been”, he mumbles, and admits that his thoughts on this period are first of his “experiences in the army, the many wars, and all the trouble. “What men have since learned, he does not know:” But most of them have most likely forgotten.
His acclaimed performance has been in the air for a few minutes, he has been smoking a cigarette out of doors and is now sitting behind the black table with hanging shoulders and saddest eyes, where band mate and brother-in-law Michael Edmondson sells CDs and poetry. Edmondson has been talking to Dowd for 33 years, starting in New York’s punk band Neon Baptist. His autographs and dedications are always provided by Dowd with a small drawing. Selzer hands him a glass of bourbon. Johnny Dowd has had to endure this world long enough to tell a lot. For a long time he worked as a furniture packer and had his own company. The first marriage is said to have lasted only two weeks.
Today he’s only doing rock n roll In the song “Dream On” dedicated to his current wife, he complains; “I did the best that I could but did not do what I should.” At first he probably just tried to spend his time in a good mood. Anyone who, after the wildest youth, only picks up a guitar at the age of 30 and starts making music, will always listen well and have seen a lot. Edmondson calls him a “real guy” “and is right. Because Dowd does not play a role in his role but the American nightmare of the eternally unfulfilled yearning. Yes, that’s Rock n Roll Blues Folk Americana. This is not songwriting but songsuffering.
Dowd creates arrangements that are so rude and beautiful that you almost stifle the fulfillment. Everywhere one hears the americanish 20th year dying out, which is dying. If you lose your sense of humor, it will be really bad, “he says,” you pack the sentence in your backpack and look forward to the next morning. “That’s life, Matthias Dreisigacker

Johnny Dowd likes to drink whiskey, is a Vietnam veteran and former furniture forwarder, was married for two weeks and sings, a reviewer wrote, ” like a serial killer trapped in a vacuum cleaner. ” His songs are quirky Gesamtkunstwerke, made up of pieces of country, blues and everything else. The drums clank, lyrics about unrequited love, murder and other nasties put the hackles, and distorted guitars crack, as if there would be no tomorrow. Maybe it does not exist because, as Dowd himself says, “I’m not sure how many tunes I still have in it, tick tock.” 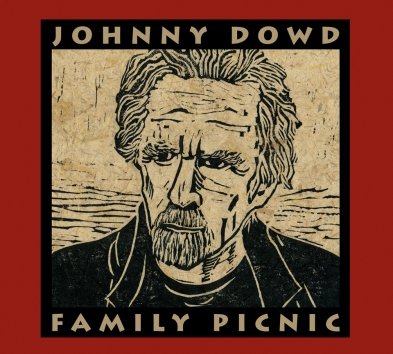 Released just prior to Johnny Dowd’s upcoming European tour, Family Picnic has been touted as a slight return to the sound and themes of his earliest albums with less of the tortured electronic skronking which informed his last couple of releases. Certainly Dowd’s idea of family values is not the same as someone like Thatcher or Reagan would have espoused as his families are composed of folk who are like rabbits caught in a headlight, catastrophe rushing towards them. And while the album continues to sound as if it’s been washed in an acid bath, the drums and vocals scarified into the songs, the guitars and keyboards misshaped by the process, by Dowd’s standards it does go some way back to that weird American Gothic which was celebrated in Jim White’s film, Searching for the Wrong-Eyed Jesus. As Dowd sings on the closing number, “I sing songs of lust and depravity, that’s the only kinda songs come out of me,” and that just about sums it up.Much of the album pursues a kind of mutant gutbucket blues with snarly guitar to the fore although it also dips into kaleidoscopic and frightful carney funway music and primitive country jaunts. The opening instrumental, Hoodoo, buzzes with hot guitar and exotic xylorimba summoning up thoughts of mondo type exploitation movies of the sixties. However, it’s like a frog in a blender as it gets increasingly twisted out of shape ending in a wonderfully demented organ solo. Next up, Dowd comes across like a Lou Reed revenant as he sings The Man Of Your Dreams over a ramshackle backing and owes up to having something missing from his psychological makeup, a hollow man indeed. Here he’s got a vocal foil in the shape of Kim Sherwood-Caso whose deadpan contributions to several of the songs add to the bathos. There’s a bit of a side step as Dowd examines the psychological makeup of the south in the maggot infested blues of Vicksburg before he launches into the flickering neon flash of Shameless, a song which demolishes anything The Stones have ever done when they tried to get down and funky and dirty. Again, Dowd’s hero is falling apart, dependent on his “baby” to pull him up while the music is as insistent as a dentist’s drill pile driving into a cavity.

Dowd screws with your mind throughout the album. The melodious chorus to Walking Floor has Sherwood-Caso repeating the words, “Big fucking mess,” while on The Stuttering Wind the harbinger of love is a “shiny black crow” who has a sideline in scavenging the souls of the recently buried. Four Grey Walls is twice as demented at least as the most demented of Tom Waits’ cracked fairground waltzes and on Back End Of Spring Dowd unleashes some scabrous  guitar  as he lays down a beat version of the Greek myth of Demeter and Persephone. Closer to home, the title song is a litany of the broken and diseased participants of a hellish family gathering and then there’s the tale of Little Jimmy, a threnody for a man who, as Dowd sings, “Was not evil, just a fuck up.”Anyhows, Jimmy gets his comeuppance when his wife, “Cuts his throat because his bullshit she would not take.”

Listening to Conway Twitty is somewhat akin to being inside the brain of any aspiring country star when they’re experiencing an epileptic fit. The ambition sparking but zapped by rogue neurons firing off in all directions, eventually ending in a fugue induced and plaintive plea, “I wanna be a star.” Dowd closes the album with the supremely engaging heaven and hell battle themed Thomas Dorsey where he compares himself to this giant of gospel song and admits that he can’t sing of salvation, only hell and damnation. For what it’s worth, we’d say that Dowd’s trips into the underworld are as glorious as any hallelujah.

Of course, we have no photos of the future show, but here’s some shots from last year at The Haunt. Johnny-centric as usual (per the blog name!) but a great show with many local talents. Check the poster-you can catch them again this Sunday!

Johnny's at the Mic