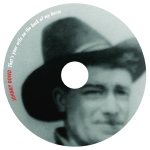 This is not a review of the latest album. If you are a Johnny Dowd fan, you  look forward to every new release because his music is always interesting, exciting, and unpredictable. I have been a fan since 1990 and have yet to be disappointed by predictability and repetition when it comes to his performances and albums. The first listen to this one made me think of his first great album, Wrong Side of Memphis. After more listens, I find it to be the culmination of everything he has done so far, with references from every previous album. The following is simply my own reactions/reflections on each song. As a whole, I definitely find this album to be his best of all.

“That’s Your Wife On The Back Of My Horse”: The opening grabs you by the ears immediately, welcoming us to the Church of Johnny Dowd by way of ghostly, psychedelic instrumental sounds with Johnny introducing the album in a way that reminds me of those strange 1950s Baptist preacher sermon albums.

“White Dolomite”: Let’s get funky in a Residents kind of attack.

“Cadillac Hearse”: Its got a definite Captain Beefheart bluesy feel. Anna Coogan helps him out on vocals. Once again, Johnny has found the perfect female voice to facilitate his musical vision.

“The Devil Don’t Bother Me”: Time for a Tom Waits-ish bluesy take on the bond between good and evil.

“Empty Purse”: An excellent Late Night Nightmare Mystery Movie of the mind soundtrack. This is the point where I lose control and my mind starts to drift off into the music itself for the rest of the album.

“Why?”: A sweet ballad with the return of Anna. I swear this could have been one of those surprise hits back in the late ’50s.

“Sunglasses”: The Residents take on Phil Spector, and the wall of sound comes tumbling down.

“Words Are Birds”: Time for some Twilight Zone funk.

“Dear John Letter”: You may know this one from an earlier version or two. He has reincarnated the song with Anna as a driving/haunting Mystery Movie Matinee feature.

“Female Jesus”: Another re-imagining of another oldie-but-goodie. This time with a totally different perspective and interpretation.

“Poor, But Proud”: This song is the closest to his first group, Neon Baptist (aka Johnny Dowd and Mostly Family), of any song he has done since that late, great combo.

“Teardrops”: Johnny bids us adieu, for now. He sounds like he’s sinking in a  heavy sludge that has been stalking him throughout the album. Not to worry, he shall return to enlighten/entertain/surprise us another time.

–  A commentary by Bill Baldwin

1 thought on “Reflections by Long Time Fan and Friend”

I dress each morning in a red kimono,listen to the Bible radio